Can You Mix Zyrtec and Alcohol?

In general, you should never mix Zyrtec and alcohol.

Extreme drowsiness is a common effect of mixing these substances. However, other adverse side effects can occur.

Side Effects of Mixing Zyrtec with Alcohol

The side effects of drinking alcohol with Zyrtec can be life-threatening. Here are the most common:

Other side effects of Zyrtec, specifically in terms of mental health, are still being studied. Alcohol, however, is known to destabilize mood, cause depression, and increase negative thoughts.

The first category, pharmacokinetic reduces the effect of the interacting drug.

The second category, pharmacodynamic, suggests that alcohol intensifies the effect. Zyrtec and alcohol share a pharmacodynamic effect. Here are the most common associated dangers.

Liver damage — Zyrtec can cause acute liver damage, albeit in rare occurrences. However, alcohol abuse is known to impair liver function severely. Zyrtec only adds to the strain on an individual's liver.

Substance dependency — Mixing Zyrtec and alcohol can cause alcohol dependency. It canalso cause a psychological dependence on Zyrtec.

Bodily harm — The combination of Zyrtec and alcohol causes dizziness and poor coordination. Because of this, the chance for a severe accident significantly increases.

Heart disease — Zyrtec has been linked to coronary heart failure. This is a condition characterized by unhealthy cholesterol builds up. Alcohol can cause cardiomyopathy, an issue with heart muscles. These conditions require extensive surgery and treatment to correct. Drinking alcohol can lead to heart disease as well.

How Long Should I Wait to Drink Alcohol After Taking Zyrtec?

Zyrtec stays in the blood for approximately 24 hours. Drinking during this time can cause any of the side effects previously mentioned. It's a bad idea to drink alcohol even if it feels as though Zyrtec isn't working.

As a rule, mixing Zyrtec or other prescription drugs with alcohol can lead to health complications. Complications and side effects may be worse in older adults. 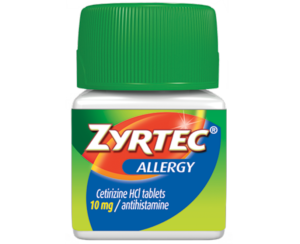 Other over-the-counter antihistamines that are similar to Zyrtec include:

Regardless of brand name, all antihistamine allergy medications work by blocking histamine receptors in the brain.

You should not drink alcohol while taking Zyrtec. The combination can induce extreme drowsiness and other adverse effects.

Side Effects of Zyrtec

Zyrtec side effects are more common the first few times it is taken. As the body adjusts, they usually decrease.

If an individual is allergic to Zyrtec more serious effects may happen. These severe side effects include:

Is Zyrtec the Same as Zyrtec-D?

Zyrtec and Zyrtec D are different drugs with several similarities. The primary difference is Zyrtec-D contains pseudoephedrine. Pseudoephedrine, also known as Sudafed, can induce strong feelings of anxiety and hyperalertness.

Both drugs are available OTC, but the amount of Zyrtec-D an individual can purchase is restricted. Healthcare providers may recommend one over the other based on individual factors. Both drugs can induce sleepiness.

Zyrtec is not addictive in the traditional sense. This means it doesn't produce any cravings or dependencies. However, Zyrtec withdrawal has been linked to temporary but severe pruritus.2

Pruritus is a condition that causes extreme itchiness. Typically, this condition resolves on its own within a few days to a week.

Estimated number of prescriptions of cetirizine in the U.S.

Do I Have a Drinking Problem?

If you are struggling with giving up alcohol while taking allergy medications, it could potentially be a sign of alcohol addiction. While this isn't always the case, you may want to consider your drinking habits. For more information, read What is Considered an Alcoholic?