Etizolam is a thienodiazepine, a type of anxiolytic (inhibits anxiety) and anticonvulsant depressant similar to a class of drugs called benzodiazepines. Other common brand-name benzodiazepines include Valium® (diazepam) and Xanax® (Alprazolam).

Many times, because of its structural make-up, etizolam is considered as a “designer” benzodiazepine. The difference between etizolam and benzodiazepines is that a benzene ring is replaced with a thiophene ring. The triazole ring has been fused, making the drug a thienotriazolodiazepine. 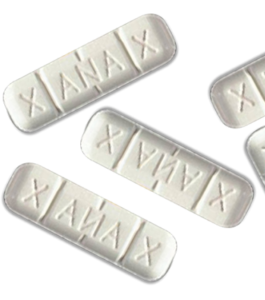 However, like benzodiazepines, etizolam can bond to the benzodiazepine site in GABAA receptors to affect the central nervous system (CNS). This means that etizolam could help treat different medical conditions, such as:

It is an extremely short-acting drug, with an approximate elimination half-life of 5 to 7 hours. This means that drug concentration in the body will drop to half of the starting dose after this time.

Yet, despite this, etizolam has been shown to be more potent than diazepam (10 times more in hypnotic effects).

This benzodiazepine analog is available in powder or tablet form, or even spiked onto blotter paper.

Is Etizolam Legal in The US?

Etizolam is not a legal prescription medication in the United States, unlike in Japan, Italy, and India.

However, many laboratories manufacture etizolam for research purposes, making obtaining the substance more accessible via the internet. Etizolam is described as a “research chemical” on different sites or at local retail shops.

This ease of availability can encourage some to buy the drug for medical use without a healthcare professional’s advice. Other individuals may misuse this drug for recreational purposes (street names include Etilaam, Etizest, Depas, Etizola, Sedekopan, and Pasaden).

A study of calls to the National Poison Data System in the U.S. showed that exposure to “designer” benzodiazepines is rising. Out of the 234 exposure cases across 40 US states, 162 were etizolam.

Regardless of the reason for drug use, etizolam does have side effects, and users could run the risk of severe conditions like overdose or death.

Side Effects & Risks of Etizolam

Because of the recent use of etizolam as a drug, more studies are needed to understand its nature and health consequences.

A recent, extensive report published by the World Health Organization sheds some light on the effects of etizolam.

For example, some common side effects of etizolam may include:

Here is a list of other events that occurred as a result of etizolam use:

Etizolam use was not found to affect cognition, i.e., memory loss.

Finally, because etizolam is a central nervous system depressant, there is the risk of respiratory depression (slow, ineffective breathing), coma, or death.

The misuse of drugs like etizolam may result in psychological and physical addiction. However, there is evidence that etizolam may not cause tolerance as much as other benzodiazepines.

In one case, long-term use of etizolam of 2mg to 4mg per day led to withdrawal catatonia (syndrome).

Etizolam is usually an oral tablet, but addicts are known to crush and snort them. As etizolam is a relatively new drug, there are no guidelines to prevent abuse and tampering. Unlike some other more common and well-known prescription drugs, etizolam does not have the same safety features.

Withdrawal symptoms can develop after sudden discontinuation of etizolam after just two weeks of daily dosing. Any dose of etizolam with evident effects taken during a long enough period can create a mental and physical dependence on the drug.

Reports vary from two weeks of daily use to an entire month for initial signs of physical addiction. Individual biological differences and history of addiction also play a significant role. Some people develop mental and physical addiction more quickly than others.

Individuals suffering from anxiety disorders may choose to take etizolam despite its health risks. Etizolam has anxiolytic effects that may help treat such anxiety.

However, because more evidence is needed to understand etizolam and its effects on the body, it is not recommended to self-medicate. Instead, individuals with anxiety and panic disorders should seek professional help to discuss a treatment plan.

For those individuals who have already developed an addiction, other options are available for recovery. These include inpatient care and a detoxification program. In such cases, healthcare professionals can personalize treatment plans and taper dosing accordingly to ensure a healthy, controlled comeback.

There are three different phases to addiction treatment:

The detox period is when the body metabolizes etizolam and removes it, returning to normal functioning. For most drugs, detox is the time it takes the body to remove a substance and how long it takes for withdrawal symptoms to stop.

Etizolam is removed from the body in approximately 12 hours. This is based on five half-lives of the drug’s metabolism.

However, the removal process of etizolam is not that straightforward. When the body breaks down the drug, it breaks it into other substances that are also active. These ‘active metabolites’ work in a similar way to the parent drug and extend the symptoms of addiction and impairment.

Etizolam has active metabolites that can remain in the body for up to 40 hours. Additionally, some individuals metabolize etizolam more slowly than others, and it can linger in their bodies for up to three-and-a-half days.

Like benzodiazepines, the return to usual functioning after detox can take anywhere from several days to months. It can even take years, depending on how long a person has been abusing a drug.

Detox for etizolam and similar drugs is typically slow and uncomfortable. Expect withdrawal symptoms to persist for long periods and adversely affect daily life. People experiencing etizolam withdrawal can benefit from the help and support delivered by a medical detox program.

How long does etizolam withdrawal last?

When an individual stops taking the drug, withdrawal syndrome may arise and last between a few days to months. Each case is unique.

What Benzo is Etizolam closest to?

Etizolam could be comparable to alprazolam (Xanax®). Both drugs offer sedative effects and help to treat anxiety or seizure disorders.

What is etizolam withdrawal?

Etizolam (thienodiazepine derivative) withdrawal is similar to benzodiazepine withdrawal. An individual who has become dependent on the drug may go through withdrawal symptoms after quitting. These symptoms may vary from individual to the next but could include: