Morphine is an opioid anesthetic used for moderate to severe acute and chronic pain relief and pain management. It can be taken orally or injected and is typically only administered by healthcare professionals.

Morphine affects the neurotransmitters and opioid receptors in the brain responsible for regulating dopamine levels in the body. The active ingredient in morphine is derived from the opium plant, which has been widely used throughout history as a pain remedy. 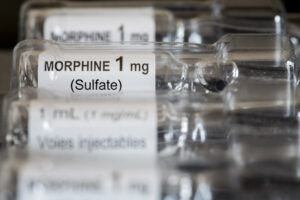 Physical and psychological dependence are major concerns with taking morphine as it is frequently misused or abused, often leading to addiction.

Side Effects & Risks of Morphine

A major risk of using morphine is developing an addiction or physical dependency. When used as prescribed, people taking morphine may experience only mild side effects that are not typically hazardous.

However, if morphine is misused, especially over a long period of time, the risk of developing potentially dangerous and life-threatening side effects greatly increases.

Common side effects can include:

Long-term use or abuse can lead to more serious adverse effects, including:

Why is Morphine Dangerous?

Morphine use is dangerous because it can be highly addictive. Mixing morphine with other central nervous system (CNS) depressants, such as alcohol can greatly increase the risk of overdose and even death.

Tolerance to morphine increases the longer you take it, eventually taking larger quantities to get the desired effects. Often cheaper alternatives are sought in order to be able to afford increased quantities. This increases the risk of developing physical dependence and the potential for overdose.

When taken as prescribed or under medical supervision, morphine is not generally considered dangerous.

Opioid use, misuse, and addiction have become a growing problem in the United States. Some individuals who are addicted to morphine resort to “street alternatives” to continue substance use after prescriptions run out. Resources and services have been put in place to help combat this serious issue.

Can Someone Overdose on Morphine?

It is possible to overdose on morphine. Intentional or accidental overdoses can occur when taking this medication. This is especially true if a person takes more than what has been prescribed by a doctor or qualified healthcare professional.

Some risk factors that predispose a person to overdose are:

How Much Morphine Do You Have to Take to Overdose?

It usually takes about 200 milligrams of morphine to cause an overdose, though there have been extreme cases where drug overdose occurs with as little as 60 milligrams. A normal dose of morphine is between 20 - 30 milligrams.

While it is possible to overdose, the amount of morphine needed for this to occur depends on a variety of factors. These factors include the patient’s specific condition, underlying health issues, and tolerance level to the drug.

Another major factor affecting the amount of morphine needed to overdose is if other depressant substances or alcohol are present in the bloodstream.

Overdoses can happen quickly even when taking morphine as prescribed, though this is much less common. Most overdoses occur when the drug is being used without a prescription.

Morphine overdose may be difficult to detect. Sometimes it may appear that a patient is sleeping when in fact, they have overdosed. For this reason, it is imperative to recognize the other signs and symptoms of an overdose to know when to call for immediate assistance.

Morphine overdose symptoms that should be monitored include:

When to Visit the Emergency Department (ED)

If a person is experiencing any of the symptoms listed above, call 911 or seek urgent medical care. If you know someone who has been misusing or using morphine or appears to be experiencing any concerning side effects, do not hesitate to seek emergency medical help.

Opioids act on the central nervous system of the body. Therefore an overdose on morphine can cause a person's breathing to slow down to the point of coma, respiratory failure, and even death. If you suspect someone is overdosing, a visit to the ED is necessary and can be life-saving.

Treatment for an Opioid Overdose

With basic life support and proper medical attention, the effects of an overdose can sometimes be reversed. However, it is imperative to treat overdoses as soon as possible after they occur. This is to give the person the best chance of recovery. It is also largely dependent on how severe the overdose is when determining the likelihood of making a full recovery.

Treatment for an opioid overdose is typically administered with an antidote such as Naloxone. Healthcare professionals typically only administer this, but more people are beginning to carry a naloxone pen (nasal spray) for emergency use due to the ongoing opioid crisis.

It is important to note that anyone who will administer this life-saving shot must be properly trained on how to do so safely and effectively.

Resuscitation or CPR may also be needed to treat a person who has overdosed on opioids. Specific cases may require specific treatments that can only be carried out by a doctor or trained healthcare professional.

Opioid use disorder is difficult to overcome. Fortunately, there are several options for help. These include: